While previous AoE2 HD edition was basically an update for modern systems, Definitive Edition brings significant and much needed improvements which make the two-decades-old game more playable and enjoyable, most notably:

The game is really great on its own, but the search for perfection never ends and there is integrated mod support, so let's talk about few essential mods that improve the game even further!

All these mods are UI/graphics/sounds utility mods or scenarios that don't interfere with game data so you can safely use them in online matches including ranked and they're easily available from the in-game mod browser.

What did the monk say?

First and foremost, let's talk about the game's most distincive if not signature unit - the monk.

I don't think I need to explain what WOLOLO means. In fact, it's a top tier meme that's still strong after two decades and I never quite understood why AoE 2 replaced the legendary conversion sound with a boring and generic "holy sound".

Modding community provided fixes for this critical regression in the past like Wololo Monks mod for AoE2 HD, but Definitive Edition changed sound engine so old sound mods don't work.

This was the only mod I was really missing to complete my AoE experience so I wrote it myself and uploaded to the in-game mod browser:

Now you can WOLOLO like any self-respecting person would, courtesy of texnoforge ;)

The new graphics are nice, but trees are so big they sometimes make selection, commands, and building placement more difficult than it needs to be. 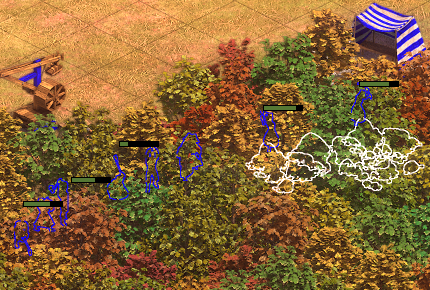 There are several options to make trees smaller, pick one:

If you happen to actually like CubeTrees, you can convert all resources to cubes using the infamous Age of Cubes mod ¯\_(ツ)_/¯

I really like the Art of War series of tutorials/challenges that explain and let players train essential aspects of the game. If you'd like to improve your opening and individual build orders even more, there's a great mod which works much like the Art of War but includes 10 different build orders to train with A-F rating for you to improve on. Activate through Game Mode -> Custom Scenario.

You can also train hotkeys to construct various building quickly and reliably, giving you more time to focus on important things and less rage over that lumber camp on gold that should've been mining camp. Activate through Game Mode -> Custom Scenario.

Unless you remember details of all 35 civs, consider displaying condensed version of tech tree of your current civ at all times, which is especially useful when playing random.

Blood for the Blood God

By default, dead bodies of units disappear quite fast and no skeletons are left behind in DE. And thus my final reccomendation adds blood to the game which stays for quite some time. Aside from the obvious visual pleasure of good slaughter, it provides utility of marking the spots of battle for quite some time.